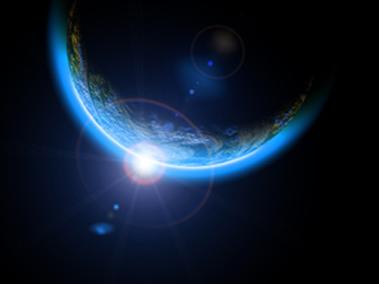 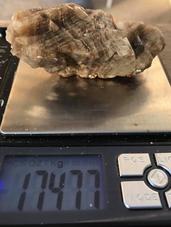 Kefazra (Kef-Az-Ra) – Source Light Crystal - is a newly discovered, yet very ancient crystal found on the exquisite Greek island of Kefalonia. Kefalonia is the most beautiful and tranquil Island. A gem in the heart of the Ionian sea. To ‘unearth’ such a remarkable crystal here is very exciting! For millions of years it has been lying around, until now. Its beauty & divine metaphysical properties now discovered!

Kefazra crystals are millions of years old. Tectonic Quartz is the result of the massive shift of energy from the Earth's movement. The striations and grooves on these crystals were created from movement in the tectonic plates deep within the Earth. This movement is what causes the crystal to shift into a new form. Kefalonia is situated on three tectonic plates. This makes it a very “energised” Island. You can feel the energy when you swim in her ocean. To hold this crystal is a reminder of the divine energy the Island holds.

Kefazra Tectonic Quartz is a most powerful Quartz and an extreme ‘energy amplifier’. Due to the conditions it has had to endure to form, it holds a magnitude of Piezoelectric energy. It helps to absorb, store, release unblock and regulate energy. It stimulates the immune system and helps to bring the body to balance. It cleanses and enhances the organs. Opens the Heart centre to receive divine light. It infuses the Sun’s rays of electromagnetism into the vessel. Bringing in vital light-force that fortifies and rejuvenates the entire human system. This crystal takes us inward, highlighting our strengths and supporting us in standing in our own power, truth and integrity. Just to be in the presence of this crystal you can feel an abundance of love, light and energy. Infusing its vibration into the body. Removing limitation so that the vessel can feel free. It removes stagnated energy almost instantaneously. It works on all levels of being. It helps to enhance psychic awareness, electrifying your senses, raising consciousness and attunes you to your spiritual purpose. On an ascension level it assists in removing that which holds you back. Allowing you to feel uplifted and energised.

In general, Quartz protects against radiation, generates electromagnetism and dispels static electricity.  It works at a vibrational level; attuning energies to the specific requirements of the person needing healing or undertaking spiritual work.  Quartz Crystal is a master healer and may be used for any condition. Quartz crystal stimulates the immune system and brings the body into balance. It is excellent for soothing burns, harmonizing all energy centres and aligns the vessel’s vibration. It may be used in the treatment of disorders of spinal alignment, circulatory disorders, and to ameliorate toxicity, strengthens the structure of the veins and disseminates and disperses growths.

Kefalonia is the largest of the seven Ionian Islands and lies in the centre of the Ionian Sea. The island has a population of almost 45.000 inhabitants with most of these located around the capital, Argostoli. Kefalonia has a surface area of 781 sq. km, with 254 km of coastline. It takes its name from a hero called Kefalos who fought on the island in the 5th century BC. The first human presence on the island is dated to the Palaeolithic period and it has been recorded that Kefalonia was one of the first Islands in Greece to be inhabited. A series of four earthquakes hit the island in August 1953, and caused major destruction, with virtually every house on the island destroyed. The third and most destructive of the quakes took place on August 12, 1953 at 11:24 local time, with a magnitude of 7.3 on the Richter scale. Its epicentre was directly below the southern tip of Kefalonia and caused the entire island to be raised 60cm higher, where it remains, with evidence in water marks on rocks around the coastline. Archaeologists have found sites on the Island dating back to Palaeolithic times (40,000 BP (before present time!).


“Three tectonic plates meet in the region of Zante, Kefalonia and Ithaka. These plates are in constant motion called” sub-junction” and cause tension between the plates leading to seismic tremors. Kefalonia is just to the east of a major tectonic fault, where the European plate meets the Aegean plate at a slip boundary”.

Please visit the Shop page for Kefazra Crystals. Special pieces are itemised on this webpage. The shop offers 1", 2" and 4" Kefazra pieces. Larger pieces are available upon request. Please email me if you would like to see the collection of larger crystals.

Kefazra crystals come in many unique variations including clusters, slabs and slices. All pieces are individual and chosen by the Supplier unless you choose a specific piece from the shop section. The crystals can vary slightly in colour from purest white, cream/yellow, peach, green, to orange/brown hues. Some have green Chlorite deposits and are most exquisite!

Please note: Crystals are shipped directly to you from Kefalonia so please allow up to 2 weeks to receive your item.

“A Jewel from the very Heart of Kefalonia" 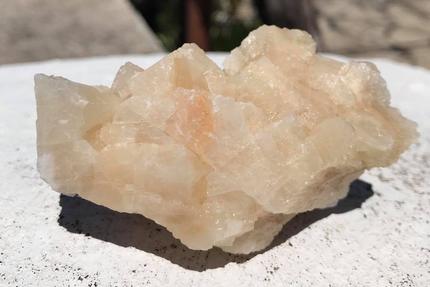